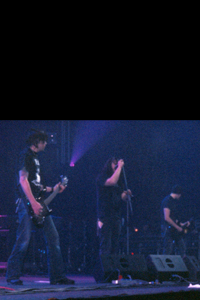 Could you introduce your musical envelope from your beginning till now, please?
We started out in '91, playing death metal heavily influenced by Paradise Lost. Did a demo in '92, started to release records in '93 and have continued to do so. Today's Katatonia sounds pretty different though as we have developed everything.
Why did you choose Katatonia for moniker? Do you want to express anything against pain it concern other sofference?
Back then we thought the name was perfect, catatonia is a disorder. I don't think about it's meaning nowadays.
Are we still 'Without God'?
I don't care for religion if that was what you wondered about.

What do you bring with you from your first albums?
The attitude of always being interested in breaking boundaries, try new things and don't give a fuck about what's considered right or wrong.
Why did you stop the brutal singing? It was so singular.
We realized it would give us a new musical dimension to work with.
'Discouraged one' and 'Tonight Decison' show tow aspects about human's sentiments. Why did you write them?
They are the feelings we like and prefer when it comes to music.
You wrote sad albums, they are great, but difficult. They can be seen as a mortuary drape only, because crowd watchs only the untimely finger who point out. Why do you like sad contents and melodies?
I guess because sometimes I identify myself with such feelings.
What is a fair deal?
Fair deals are long gone, goodness is hard to find in people.
Your 'Last Fair Deal Gone Down' album is really great. Musics and lyrics were realized crefully. Why did you choose this title? Did you want to talk about a strenghtly kind of mad sadness from this modern solitude?
The title is taken from Robert Johnson's song with the same name. We chose it 'cause it reflects the "blues", the bad vibes, the self-loathing.
Your lyrics are now much sought-after. Do you take many care of your lyrics?
I spend pretty much time on the lyrics, yes.
The descriptions in your last lyrics are very exciting, deep and clear. I like best 'We Must Bury You' and it's right real. What do you think about reality and caracters?
Reality and characters in lyrics? Well, just like in a book or a movie you have to mix up reality and fiction.
Your last songs sound intense and actractive. What kind of tunes do you search and adjust to realize a track?
Anything that sounds "Katatonia" to us... which means it's got to have a special feeling, dark, haunting, whatever.